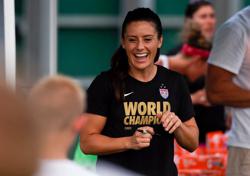 A - Ali Krieger - #USWNT - ALL class.. thanks for being a great role model and pro to all the young players in our area who had the chance to meet with you... talk with you... and get to know you!

C - Concussions - US Soccer has implemented changes ... to protect the young brains.  Given all the the research and proven studies, WHY would any parent allow their child to play youth football?

D - Defense - Today's game demands that outside defenders play like midfielders ... it's a great time to play there ... don't get too caught up in what position you play ... college coaches simply want to see IF you can play.

E - ENGLAND - The most popular league in the world ... not just my opinion ... ask the kids ... the supporters of the teams!

F - FIFA - no... not the video game, but rather... the disgrace from the main headquarters!  Bye Bye SEPP and PLATINI!

G - Goal Line Technology - Thank You. Yes ... the WHOLE ball must cross the line. However, why spend all that money on technology when fans sitting at midfield clearly have a better view to decide whether the ball was in or not?

H - HIGH SCHOOL SOCCER - Well, my opinions haven't changed.  Yes ... I support the academies, and PA has 3 really good ones with great coaches directing them.  The national team NEEDS them, but 99% of the players are there to help the top 1%, so the majority of the players in the academies are missing out on a great HS experience! Check the college placement stats ... MOST academy players have gone on to play at the SAME colleges as the players opting to play High School!

I - INSTASKILLS - Eric Franks is changing the way SKILLS are taught and developed! Haven't heard about it?  Check the FC REV website! Hundreds of players registered for the January events!

M - MLS - Major League Soccer - The new soccer specific stadiums around the country are awesome, but ... MORE has to be done to make the league better, and to attract top flight players BEFORE they can't get out of bed for training sessions and games ...  20 years so far... the next 20?  We'll see...

N - NGIN - FC has been with them for a decade... the rest of the sports world is catching on!  More exciting options coming soon with this cutting edge sports website company!

O - OH MY!  Having spent over 30 years on the side of the field with the team benches ... PLEASE GET ME AWAY FROM SOME OF THE CRAZIES on the spectator bleachers! If people could only hear themselves!

P - Philadelphia Union - Well... As soccer junkies, the only thing I can say is we MUST support the local professional team ... there's a special front office/owner... who, with his group, WILL turn this thing around.  Also, the supporters are passionate ... BUT... some of the chants at games are so silly and juvenile ... please change them ... and stop swearing... the 700 level at the VET was demolished years ago.

Q - Qatar - Seriously? What a freaking FIFA joke! No more can be said.

R - RACISM - Just a few years ago, this was a MAJOR problem in youth soccer here in the USA ... I'm happy to say we've had very few situations over the past several years!  Russia, however... well... bananas are still being thrown during matches in the country of the next FIFA World Cup ...  Boateng brothers!

S - SKILL - Hey, youth soccer coaches... continue to teach basic skills ... and make sure your players are HAVING FUN DOING IT!

T - Taylor Twellman - I guess #ESPN has no other options.  Please announce the game for what it is ... a thing of beauty and grace, like the UK announcers do it ... and don't tell us where you and Ian are having dinner after the game ... or what you and your buddy Alexi Lalas are fighting about on Twitter ... we don't care!

U - UNITED STATES WOMEN'S NATIONAL TEAM - The country rallied around you ... you inspired MILLIONS of young players and fans during the World Cup run, and we all THANK YOU!

V - Villains - The soccer villains are being removed from office ... not just at FIFA ... local and regional villains as well.

W - Women's World Cup - several members of the USA national team tried to fight the games from being played on plastic grass ... to no avail ... gender inequities in soccer continue, with no end in sight.

Y - YOUTH SOCCER - youth soccer is about the kids ... sit back and let them enjoy it!

Z - ZEBRA SHIRTS - Pennsylvania high school referees still wear them ... oh, and while we're on the subject ... let's remove 2 of the 3 whistles and add 2 flags.