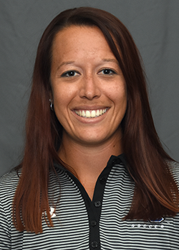 Hough became the seventh head coach of a traditionally strong Elizabethtown program, which entered its 30th season of play in 2017. The Blue Jays have averaged more than 11 wins per season since debuting in 1988, winning three conference championships and appearing in seven NCAA Division III Tournaments during that time. E-town reached the Final Four in 1997.

Elizabethtown was a tiebreaker away from qualifying for the Landmark Conference playoffs in Hough's first season as the Jays went 4-3 in the league in 2016 and 6-10 overall.

With a year under her belt, Hough had E-town playing like a playoff team in 2017 and the Blue Jays were just that by the end of the regular season. Powered by the Landmark's leading goal scorer, Lydia Lawson, Elizabethtown was back in the postseason as the fourth seed.

The Blue Jays soared in 2019 under Hough as they went 11-5-1 overall and an impressive 6-1 in a daunting conference. E-town locked up the two seed with a 3-0 shutout win over Catholic on the final day of the regular season, giving Elizabethtown it's second playoff appearance for its head coach in four years.

Lawson went on to have one of the best statistical seasons in program history, becoming only the third player to record at least 20 goals in a season. The senior set numerous program and conference records in 2019 and also ranked nationally in several categories. She finished her career as one of the all-time leaders in goals and points. Lawson was also the first All-American selection for Hough, being named to the United Soccer Coaches Second Team. She was also an Academic All-District and Scholar All-America honoree for the Blue Jays.

In her four years at Elizabethtown, Hough has coached 12 all-conference players, including the conference's Offensive Player of the Year (Lawson) in 2017, 2018, and 2019. Lawson was also named a United Soccer Coaches All-Mid-Atlantic selection in each of those seasons as well as the All-Landmark First Team.

As the lead assistant to head coach Eric Lambinus at Lehigh, Hough supported all aspects of the program. She was the program’s recruiting coordinator and worked closely with the Mountain Hawks’ goalkeepers.

Lehigh won 27 games with Hough on staff from 2011-15. In her first season, a youthful Mountain Hawks team went 6-9-2 overall and 2-3-1 in the Patriot League. Lehigh tied eventual league champion Army and owned a win over conference runner-up Navy. All six of the team’s league games were decided by one goal or less. Two Lehigh players were named First Team All-Patriot League and freshman keeper Ashley Blanks turned in the sixth lowest goals against average in a season in team history (1.14).

Blanks would prosper under Hough’s guidance again in 2013, posting the fifth best goals against average (1.01) in a season at Lehigh. The Mountain Hawks qualified for the Patriot League Tournament in 2012 and were in the mix for a postseason bid throughout 2013.

Lehigh opened 2014 with a school record six-game unbeaten streak that included a victory over archrival Lafayette and a draw against eventual Patriot League champion Boston. The Mountain Hawks registered their best defensive numbers during Hough’s tenure with six clean sheets, a goals against average of 0.94 and a save percentage of .805. Keeper Ani Nahaeptian finished the year with a 0.69 GAA and .860 save percentage.

Hough has more than seven years of Division I coaching experience. She transitioned from her role as a keeper with La Salle University from 2005-08, right into an assistant coaching position with her alma mater.

Hough spent the 2009 and 2010 seasons with the Explorers, helping lead them to just their second Atlantic 10 Semifinal appearance in program history in her final season. The 2010 team went 11-9-2 overall and knocked off third-seeded Duquesne in the conference quarterfinals.

Hough integrated herself in the recruiting process at La Salle, which included managing a database of more than 800 prospective student-athletes, communicating with over 100 prospective student-athletes and organizing campus visits. She was responsible for planning and conducting individual and team practices, working primarily with the goalkeepers.

As a player for the Explorers, Hough garnered Second Team All-Atlantic 10 honors in 2006. She was named the team’s Rookie of the Year in 2005 and won the Coaches’ Award in 2008. Hough finished her career with the program’s second lowest goals against average in both a single-season and a career. She still ranks fifth in goals against average (1.38), seventh in shutouts (six), eighth in wins (11) and ninth in saves per game (3.84) on La Salle’s all-time goalkeeping lists as of 2015.

Hough was as a volunteer assistant coach with the Philadelphia Independence (WPS) during the 2010 season. She worked with and trained some of the top international and former collegiate players such as Karina Le Blanc, Heather Mitts, Lori Lindsay, Amy Rodriguez and Caroline Seger.

Hough also has experience at various camps, including OneonOne Soccer (Lancaster, Pa.) where she trained goalkeepers and field players ranging from age 8-to-21. She also served as co-director of the Explorer Girls Soccer Academy (Goalkeeping Academy) from 2008-11 and was a personal goalkeeping instructor from 2004-12. Hough is working on staff with the Eastern PA National Training Center.

Hough (formerly Grant), has roots in Lancaster County. She played her high school soccer at Cocalico, before continuing her career at La Salle. 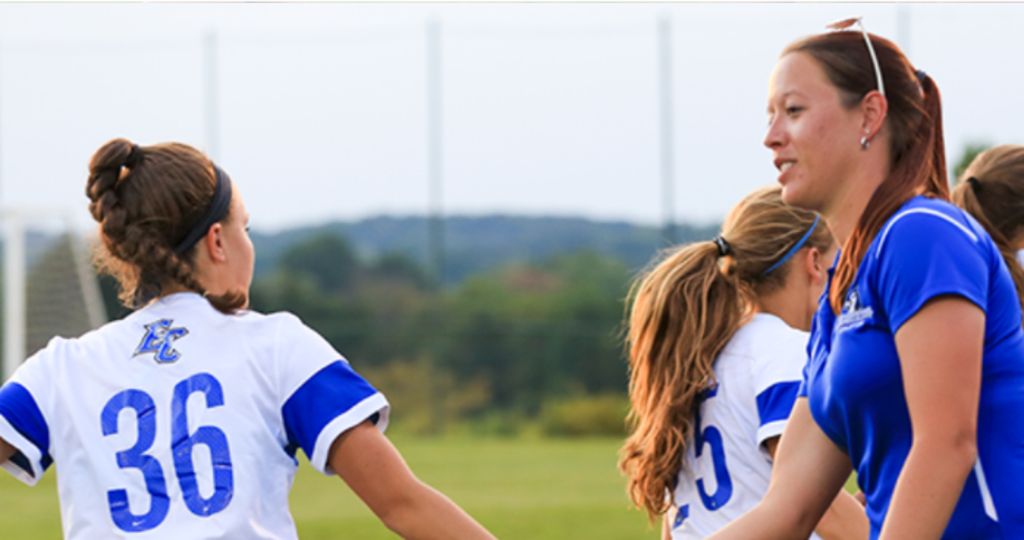